Backgammon v2.28 (Paid)
Requirements: Android 1.5 and up
Overview: The ancient, and evergreen, game of skill, strategy and luck. 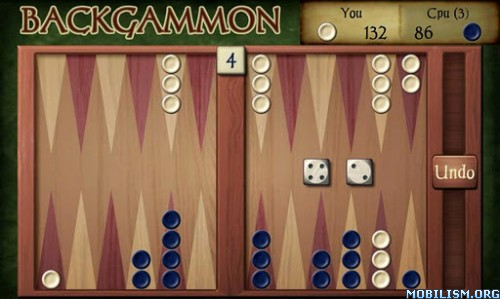 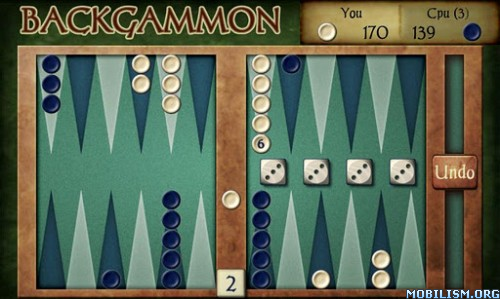 Same as our « Backgammon Free », but no Ads.

Backgammon is a game of skill and strategy and one of the world’s classic parlour games, played for recreation and as a gambling game. Like Mahjong, this is a game that is played in social groups in coffee houses and bars. Historically variants of this game are believed to have originated in Egypt over 3000 years ago, but was picked up by the Romans and then later to India. It also spread to east Asia, but was then largely replaced by Xiangqi (Chinese chess). It is now very popular in the west.
Featuring:
— User friendly interface
— Strong Backgammon AI
— 2 Boards and piece sets
— Full match play + doubling cube
— Hints, 2 player hotseat and stats
— Designed for both Tablet and Phone

*Does the Backgammon engine cheat? See « CPU Strategy » page + Manual Dice option (use real-world dice) to prove to yourself that it doesn’t*

What’s in this version:
Updated to use new Android permission model