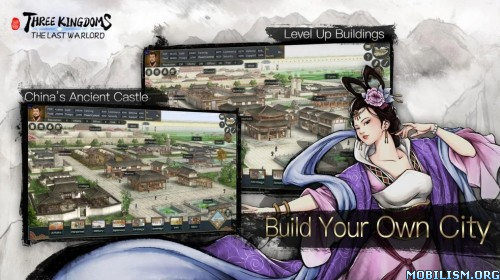 The studio created this game world set in the period of the Three Kingdoms mainly based on people’s opinions on other games set in that period. The game is very detailed in depicting the differences between various cities and also the abilities and features of the military officers. The game also applies an appealing battle system in which weather, landforms, and many other factors will influence the result of each battle.
The game is based on the famous Chinese historical novel by Luo Guanzhong (about A.D. 1330 – 1400).

I. Classic and graceful graphics finished by fine-lined drawing
The head portrait of officers are pictures from the picture-story book « Romance of the Three Kingdoms » which are colored carefully by our artists. All interfaces of the game are designed in a typical Chinese style.

II. Governing mode easy to get started with:
Auto setting and operation of governing affairs allows players to manage various affairs easily and spend more time enjoying its other facets. Since it’s a lord-playing game, players need only to pay attention to the capital by ordering prefects and make policies to govern non-captical cities automatically and giving them commands when necessary.

III. Rich gameplays and contents
Over 1,300 officers are available (including those recorded in historical books and novels).
Officers’ abilties are distinguished in detail.
Officers are distinguish by over 100 unique features.
Almost 100 verified precious items appear in the game world.
Almost 60 cities of different styles and hundreds of features of cities are available.
A techs research system with rich content runs through and supports the whole game.
Six major basic arms and more than ten special arms constitute a rich arms system.
Ultra abundant official positions.
A marriage system dicided by you and a humanized child training and inheritance system.
Various natural phenomena and disasters simulate the disastrous period of the Three Kingdoms.
Merchants, seer, celebrities, famous doctors, craftsmen, blacksmiths and swordsmen wander around and visit you.

IV. The turn-based battle mode requires careful planning in deploying troops
Weather, landforms and even the height of the battlefield will influence any battles in the game.
Field battles and siege battles are presented differently. There are various siege vehicles for players to storm castles and also defending their own castles.
The troops formation system adds more interest to battles. Different arms with different formations have different enhancement effects.

What’s New:
1.Added Duel effects of items, adjusted the status of Duel tournament rewards (new items only)
2.Improved Duel algorithm
3.Optimized Special Skills
4.Adjusted damage mechanism and reduced the abilities of some Troops
5.Reward the same item in bulk are supported(consumables only)
6.Most suitable drugs will be sorted automatically when selecting injured officers
7.Skill:Forecast can check the weather conditions in the next few rounds
8.Defeated and retreat will reduce Morale by 50 points